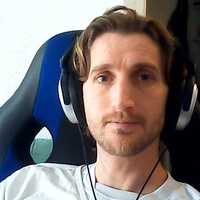 I am 39, I come from Brussels and currently live in the south of France.

In 2001, I studied Visual Arts (Comics) during three years and in 2012 I re-oriented studying Orthesiology-Prothesiology. That's when I started learning 3D modelling with video tutorials and forums, in the first objective to produce 3D-printed orthosis.

From 2018 to 2022, I worked as an Anatomy illustrator for a private company in Montpellier where I created hundreds of 2D illustrations of the dog's anatomy and of the human anatomy.

The possibilities offered by the existing open source models of anatomy combined with the recent evolution of Blender soon became obvious, so that when my contract ended in February 2021, I went on working on the anatomy but in 3D and in open source after the end of my contract.

With the help of a Marcin ZIELINSKI -a Polish Python, coder- and of Lluis VINENT -a Spanish Unity Developer-, the first open source atlas of human anatomy progressively evolves since then.

The University of Leiden received a grant to complete and verify the anatomical model.

'Z-Anatomy' is now an association aiming to support the learning of Anatomy through open source solutions.